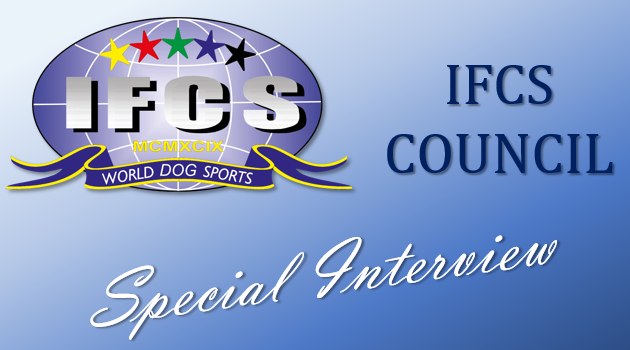 We are pleased to introduce the IFCS Council members.

Hi Luis, thank you for joining us in this special interview.  You are Acting President of IFCS and one of IFCS original Council Members.

Tell us about when you first joined and collaborated with IFCS?

I joined IFCS, it was back in 2001/2002, just at the beginning, I was then President of FEAEC, the Spanish Federation. We, Yuri Ostashenko, Kenneth Tatsch and myself met at Madrid airport to sign the paperwork, as an “anecdote” – Yuri brought a bottle of Vodka to celebrate, unfortunately the bottle fell and broke and we could not taste the Vodka -.

Spain organized the second WAC in 2004, that took place in Picassent (Spain).

I have since then attended all WAC events, except 2018 in Italy due to personal circumstances. In the beginning, WAC was held every 2 years, but after requests from countries and athletes, we agreed to hold the event every year starting in 2013.

Hi Kenneth, you are one of the founding fathers of the IFCS. What does the International Federation of Cynological Sports represent to you?

IFCS was formed to promote and grow cynological sport in support of the Olympic Ideal and to work toward betterment of sport through exchange of ideas by working among organizations around the world who share common view of sports for people with dogs.  Dog agility, of course, is the first major global sport for dogs that has been created in the past 50 years and has all the dynamics of sport.

Here you can find an article that talks about dog agility as sport and how USDAA (United States Dog Agility Association) addresses sport development.

While we each must focus on local, regional and national needs, we must look farther ahead to a rebirth of international events that serve to provide a significant means of interaction among nations.

What is your vision for the IFCS for the next 5 years?

Over the next five years, I think it is imperative to plan further ahead and to map out a course for more direct and effective interactions between national organizations to fulfill our goals as member nations, as well as to satisfy our mission in pursuit of the Olympic Ideal.  We must look less at what the next year will hold and look beyond, taking necessary actions during the coming year that can advance the organization to a new level in the future and for years that follow.

The next two years will prove most difficult as we all work to overcome the void left by the pandemic while continuing to combat what appear to be erratic changes in government regulations at all levels.  Through more continuous collaboration and pursuit of working relationships among IFCS members, we can each grow stronger and achieve our mutual goals.

Dear Steve, you are a past President and Secretary-General of IFCS.  How many years did you lead the IFCS?

I joined the IFCS Council in 2004 and have been involved with the IFCS over the past 16 years.

During that time I have held 3 different positions of approximately 5 years in each position, being 5 years as a Council Member, 5 years as Secretary-General and 5 years as President.

The IFCS has always been managed by the Council as a whole, working as a team, rather than being led by any one individual, and over the years I have been proud to be part of that senior leadership team. In the first 10 years the Council was working hard to build the IFCS and set the goals and expectations for the organization’s future direction. Then over the past 5 years, the Council has been working on a new constitution and moving our HQ from Russia to Belgium (which is now complete), growing our member nations at our World Agility Championships (WAC) and, as always, keeping a firm eye to the future and the long term goal of seeing our sport of Agility become an Olympic sport.

The year 2020 was obviously a hard year for all international sports and the IFCS was no different, but I know the Council is optimistic and with our five year action plan, we look forward to continued growth and to progress forward in our journey towards Olympic recognition as a sport.

What is your favourite memory during this period?

I have been to every IFCS WAC since 2004 in many countries around the world, including Spain, Belgium, Italy, UK, USA and the Netherlands, and so it is always hard to pin point any one favourite moment or memory.

But I would say overall, the stand-out would be the ability as a Judge, or a spectator, to watch and admire the skill of the athletes and their ability to direct their canine partner around a difficult course at very high speeds.

Some dogs have the ability to  travel at over 7 meters per second, yet as a team, the athlete and dog are still in perfect control, balance and synchronization, manoeuvring around the obstacles in perfect harmony, at speed and without error.

For the IFCS, with our unique emphasis on the athlete, it is even more apparent how important “strategy” and the understanding of the weaknesses and strengths between an athlete and their canine partner is, due to a long standing IFCS belief that our sport is not just about testing the team in standard Agility and Jumping, but to test the team across all disciplines, including Gamblers and Snooker.

After some 33 years of Judging, I still get enormous pleasure watching an athlete who has spent years training and perfecting their craft to put it all together to complete the perfect run, without fault and seconds faster than the next best team on the day.

Of course the dogs themselves, that goes without saying, they are brilliant and their ability to understand the smallest direction from their human partner is nothing more than amazing.

Within the IFCS we like to promote what I believe are the 5 key aspects of any athlete wishing to be at the top of their game in our sport, being:

I have talked about the athlete and the dog, the two most important components of our sport.

But if I am to talk about favourite memories, I would be remorse to not mention the national member organisations that promote the sport in their own country and that have banded together over the past 20 years to allow the IFCS to exist and grow.  Having been in an IFCS executive position on the Council for many years, I have many fond memories of my interaction with many individual people from around the world who make up the IFCS “family” and the great pleasure to see their “commitment” to our sport, as we all work together to not only formulate rules and policy, but to also run the World Agility Championships (WAC) from year to year, which in my opinion is the pinnacle of the sport due to the very high calibre of the competitors and the schedule of events the IFCS offers.

Wim, you are a member of IFCS Council and a great event organiser.  You have also been Chief Judge at the World Agility Championships quite a number of times.  What are the pros and cons of undertaking this important role?

When I was part of the organizing teams for the WAC-events in Netherlands in 2019, 2016 and 2014 I was able to bring the experiences I had from all the other events that I worked in as a Judge, Chief-Judge and / or IFCS council member. This helped the team to consider different options, making the next event better. Also, for IFCS I was able to suggest changes in the event-programs that possibly would not have been thought of. Sometimes this caused some friction with different opinions from both sides, however I am glad that, for all of these situations, we were able to find a good solution.

What plans does IFCS have for the WAC and/or its activities next year?

At this moment it is hard to plan any events due to all of the restrictions caused by Covid-19. My hope is that the new vaccinations will soon prove to be effective and teams will be allowed to travel.

Dear Anton, you have been a Judge at the WAC (as well as Chief Judge) and a Council Member too. When did you become a member of the IFCS Council?

What does the World Agility Championship represent for you?

The World Agility Championship is multifaceted for me. This is a competition of the best athletes, and one of the largest starts of the year.

It is also an opportunity to meet and chat with like-minded people and friends. And also, every time it has a special atmosphere that you want to return again.

Hi Dirk you have been a member of the IFCS Council for many years. In which year did you take part in the WAC for the first time?

It was on the 6th of July 2002 that I signed a statement, in the name of the Cynological Society VOE, with the IFCS. This gave us the opportunity to participate at the WAC in 2004 held in Valencia, Spain. In 2008 we hosted the WAC ourselves in Ingelmunster, Belgium. And in 2012 I became council member of the IFCS.

What do you like about the IFCS World Agility Championships ?

You can clearly see that year after year the level of skills are improving since the holding of the WACs. Every WAC I am impressed how the technique, running lines and pace improves. This can only mean that the training methods worldwide are getting better and better. We should not underestimate that the quality of the dogs is improving too. It would also be illogical that the thousand members of a worldwide organisation would not push the boundaries.

The IFCS is the only recognised worldwide organisation that organises a standard, jumping, snooker and gamblers individual and organises the Relay for country teams at a WAC. This way you need to be complete as a combination to participate at the WAC.

It is my opinion that all these components of Agility, which are practised by so many countries, should be recognised as sports disciplines of the Olympic Committee.

Hi Piero, you are the youngest IFCS Councilor. How many World Agility Championships have you participated in?

I took part in the WAC for the first time in 2013 in Girona (Spain). It was a great event, so Team Italy and FISC (Italian Federation of Dog Sports) decided to take part in the WAC, and all of the future championships after that. Each WAC was amazing and I was pleased to become a member of IFCS Council. We organized and held two World Agility Championships in Italy, in 2015 and 2018.

What is your favourite memory from WAC2018 in Italy?

I have loved to see a lot of new and young athletes win a medal, for example Japan, South Africa, etc. This means that the WAC is a great event where people from all over the world can “test” themselves and can show their abilities and skills.