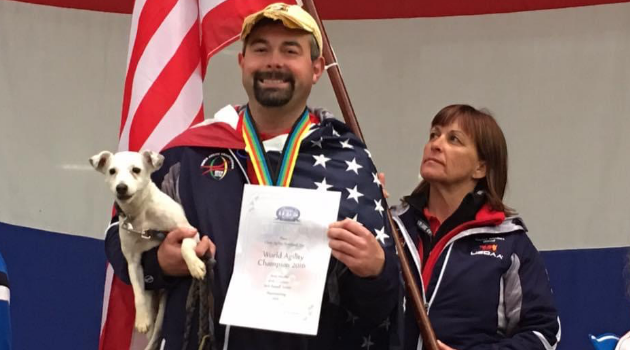 This is the first of a series of interviews entirely dedicated to the athletes and coaches that took part, several times, at the IFCS World Agility Championships.

It is my pleasure to introduce you to the first athlete & coach who agreed to take part in our interview: Andy Mueller.

There are seven WAC editions behind him, but still a lot of emotions and a great project for Team USA!

Where do you live? Rochester, MN USA

In which year did you take part in WAC for the first time? 2012 was the first year I participated in the WAC with Crackers in Dallas, TX.

Which WAC edition do you prefer? I loved all the WAC events as they are all different and each one holds some special memories for me.   The 2012 WAC in Texas was my first World Team event and Crackers and I had only been competing about 2 years together at that time, so I had no idea what to expect.   We ended up with 6 medals that year including the All-Around Gold and A Team Gold, so that was very special for us.   As we competed over the years, I got to know more and more of my fellow competitors from other team and ended up making friends all over the world.   The agility community is pretty small and an amazing group of people.  I have gained a lot over the years from competing at agility and at the WAC.

What is your favorite memory at WAC? One of my favorite memories is actually the last Gold medal Crackers and I earned together at WAC.   It was at the 2016 WAC in the Netherlands.  When we went up to accept our medal, first we got to run thru the human tunnel that the fellow competitors form (which shows the great comradery at this event), then lead by my friend Kayl McCann from Canada they all sang the USA national anthem, and lastly Crackers chipped in to howl…I mean sing along with them.  That was a great way to get your last Gold medal.

As a coach, it is also very memorable when one of your competitors wins a medal, especially a Gold Medal like Tawni Millet and Little Sparkle did in 2019.  I know I will remember those medal ceremonies and how happy they were accepting their medals, as well if not better than some of my own medal ceremonies.

Tell us the name of your dog: Crackers is a Jack Russel Terrier.  He is 12 years old and had to retire from agility 1 month after the 2017 WAC due to going blind from Sudden Acquired Retinal Degeneration (SARDs).  He was my first agility dog and together we won 20 medals at the WAC.

Tell us something about him: Although Crackers is blind it hasn’t slowed him down much.   He still loves to go for walks and hikes and play fetch.   Yes, the blind dog can still play fetch.   You just have play in a smaller area, with a big noisier frisbee or squeaky ball, and give him more verbal commands.   Those gamble skills are still come in handy.   He is pretty fearless and independent, feeling comfortable to explore new places on his own to get the lay of the land.   He has been traveling with me for work since he was 8 weeks old and still travels with me now, so he has been in a thousand hotel rooms and on a couple hundred plane rides over the years, taking it all in stride.  He is one of the friendliest dogs you will ever meet too.   I don’t think he has met a person or fellow dog that he doesn’t like and try to befriend…especially if you have a treat.   Not a typical JRT characteristic, but that is one of the thinks that makes him such and amazing buddy.

Thanks Andy for join us in this interview!